All our old-timers gathered around (except for Shai - where there is Lagerta, Shai is never there), support.

I noticed that since the beginning of the year, when the disease became obvious, no one ever sported with Tёrochka, did not conflict, did not swear. She could come and lie in any place, everyone moved silently. There was always a place near the bowl, no one said a word. They probably felt that they needed support.

I am against the humanization of animals, this often makes their understanding difficult, but most certainly empathy is better developed in them than in humans. 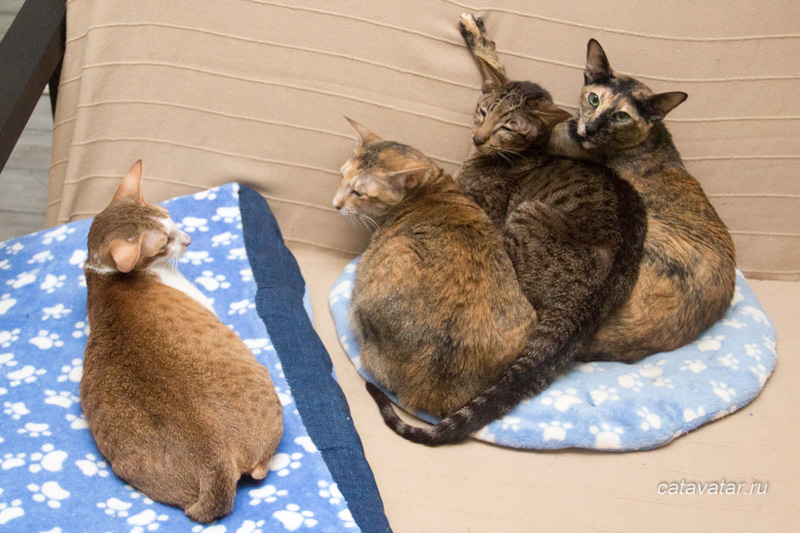 In the same composition, but already without Tёrochka ... 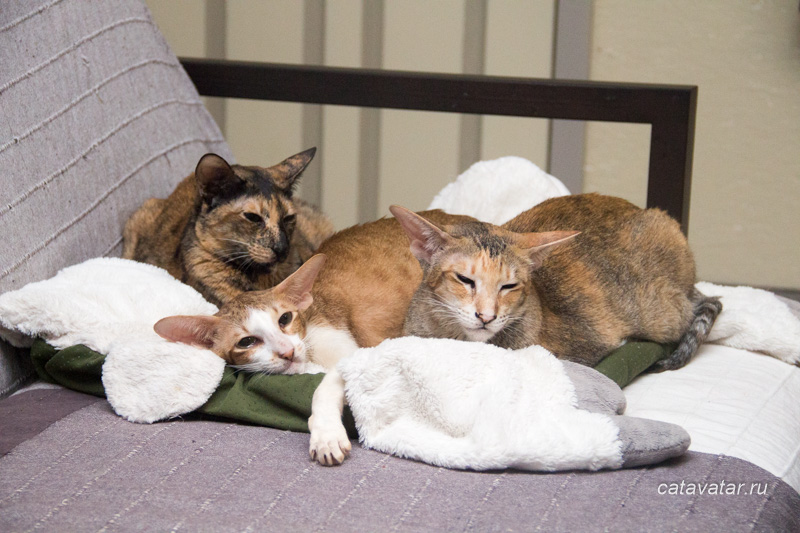 Sansa lives on its own wave.

Knowing her character, every day I strain more and more, follow her on the heels and look down her tail ... From the side it looks probably very strange.

This morning I caught some contractions in the loop and almost rushed to give birth, but it turned out that the girl just wanted to poke and ran to the toilet ...))

I just remember how it was last time ...

"During breakfast, I stupidly turned off the phone on the phone. Yoska climbed onto the table - I scolded him - he jumped onto the sofa, I looked him over and suddenly saw that Sansa was lying in the corner and was silently pushing. And there was a drop of blood around her." 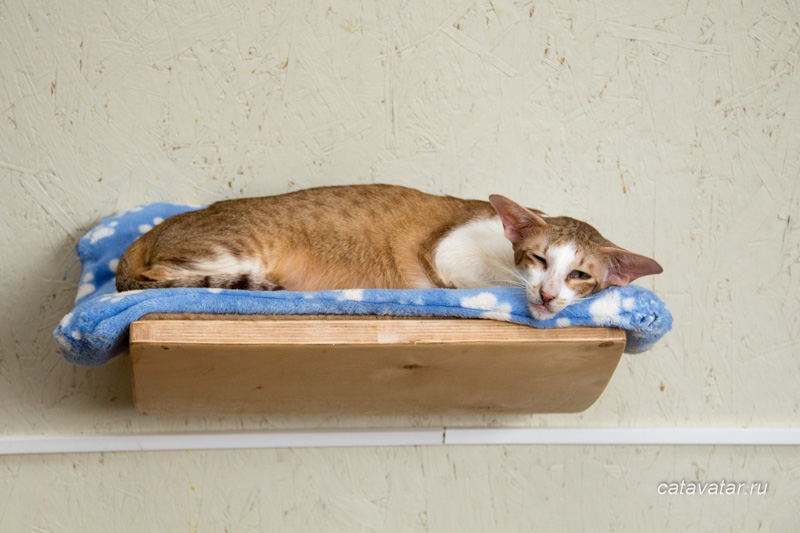 As always, they bought all kinds of junk and a bag.

From useful only two small soft toys - an elephant and a mouse, but so far they have not been given to children. Kittens are looking for gifts in a bag, they don’t find and are offended ...

Ava, as always with them )) 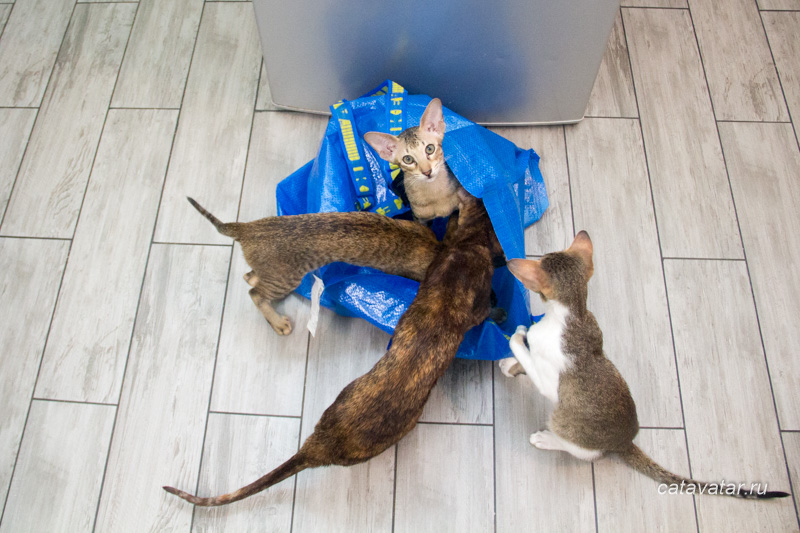 I just don’t understand the logic of oriental cats.

The whole sofa is at their disposal, but you need to crowd on a separate rag, even if this rag has already fallen to the floor)) 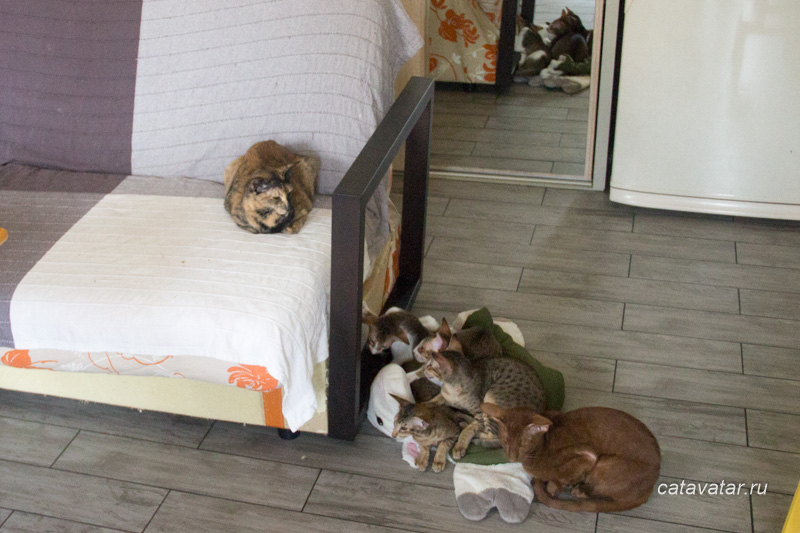 Shaya likes to bask on the stove, she likes to sit next to a frying pan or pan.

Now he lies a little to the side, but usually he will lean sideways to warm dishes and squint with pleasure )) 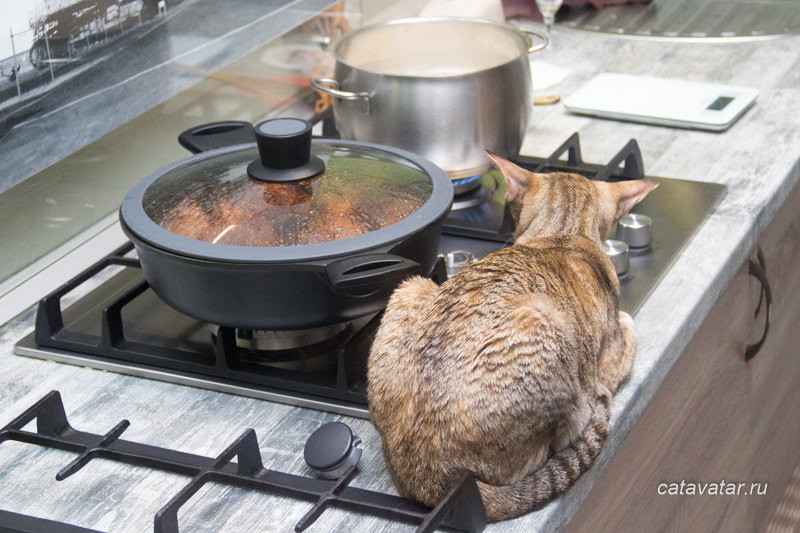 Now everything is quiet and peaceful at home.

Nobody quarrels with anyone, they do not offend anyone and do not oppress.

In the photo, Lagerth lies a little apart just because she so wanted.

Oriental kittens have grown, no one needs to be protected, there are no victims and aggressors in the house ... :) 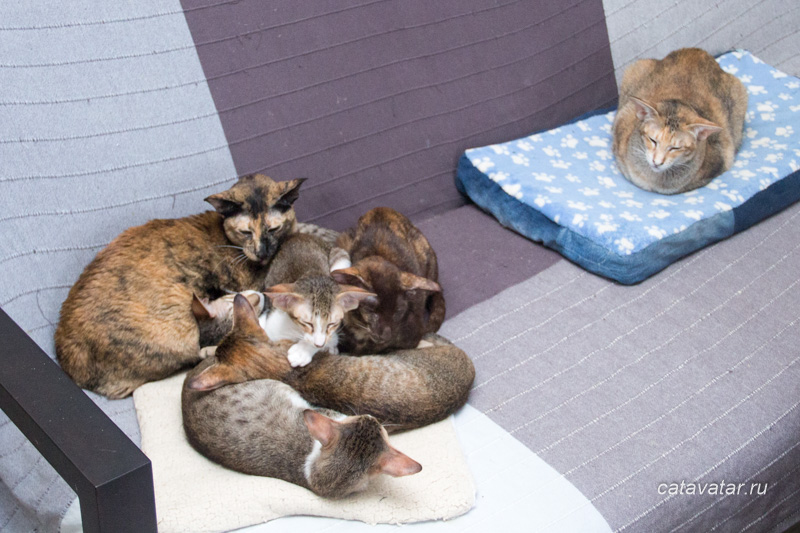 The eraser grows into a good solid cat))

While there is an idea to leave it with us or with friends. 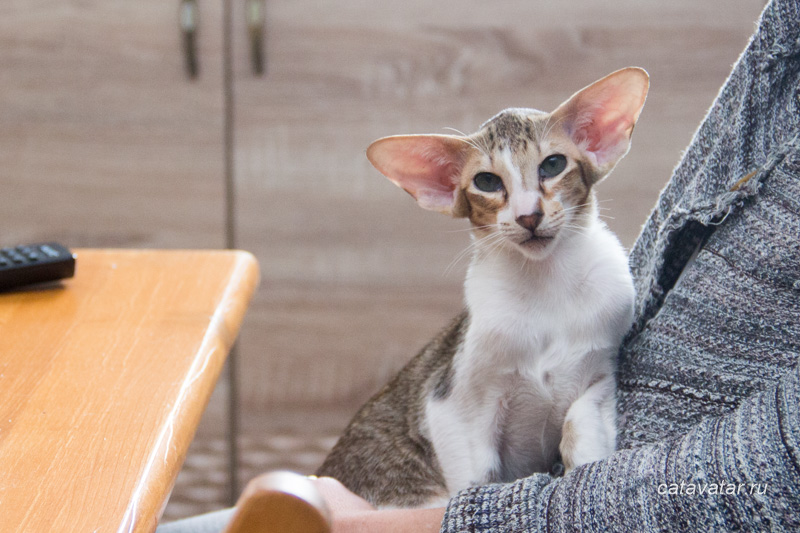 It reminds me very much of Timastik, but the genes of Pope-Dastan tweaked the constitution and he is not such a jerkman as Timastik was )

The face looks like Papa-Dastan, then mom-Sansa, depending on the angle and expression.

A very interesting cat is growing )) 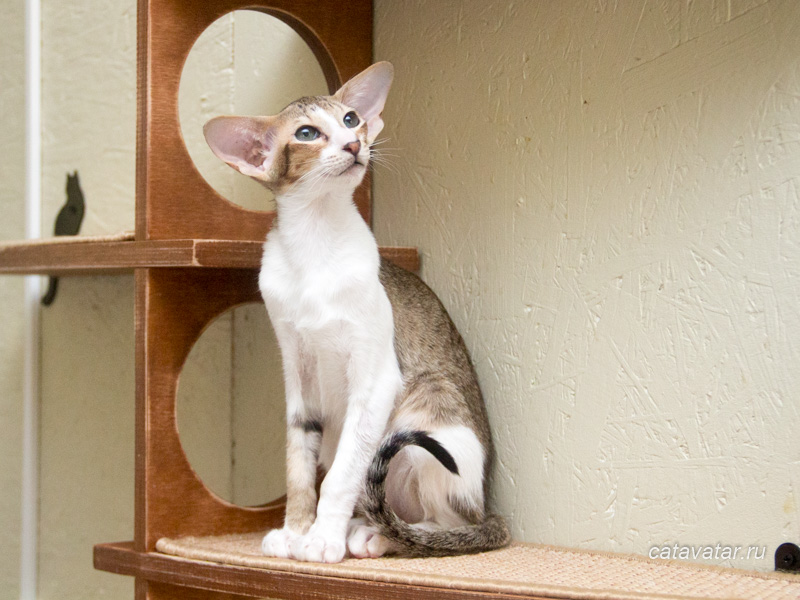 Well, about the character and say nothing.

There are three boys in the litter, as if they were supposed to grow up as “drunk hairy and evil men”, and they grew up with tender, crackling and tame bunnies :) 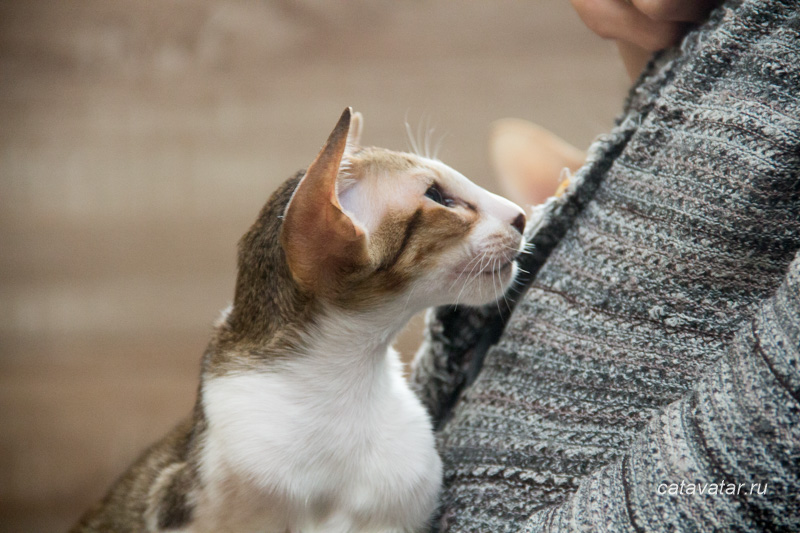 Well, our new BigCat continues to develop the territory. 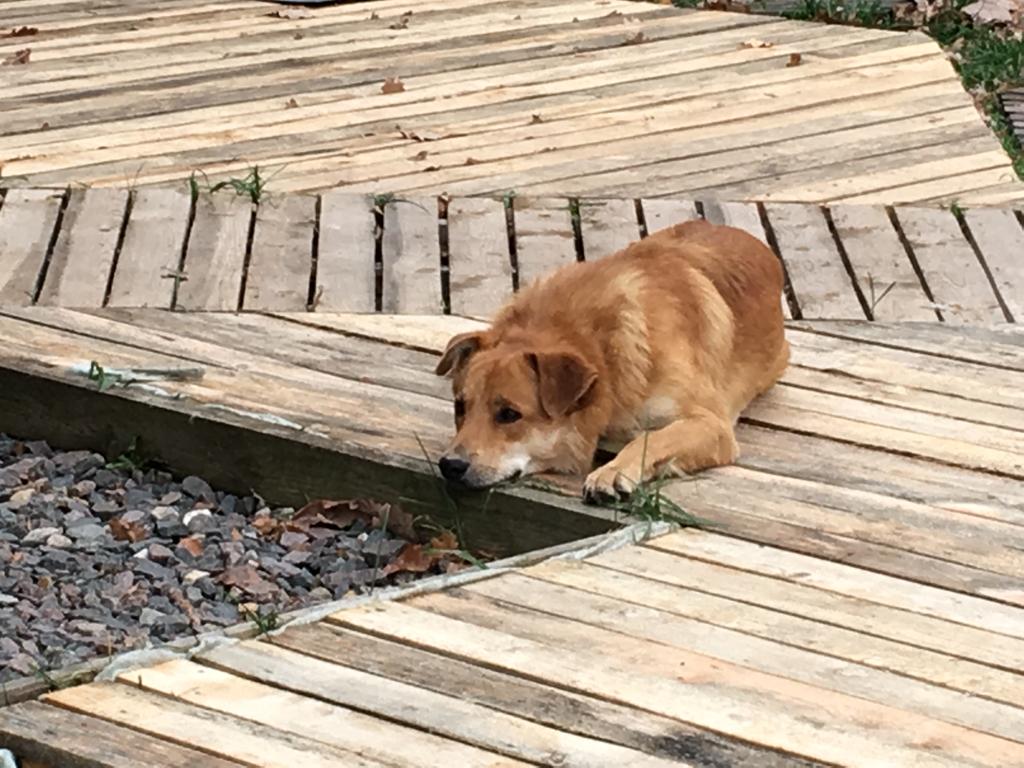 He wants to be friends with a squirrel and runs after her.

When guests arrive, happiness has no limits! Jumps and calls to play.

Can sit for hours and watch the crows, opening his mouth. 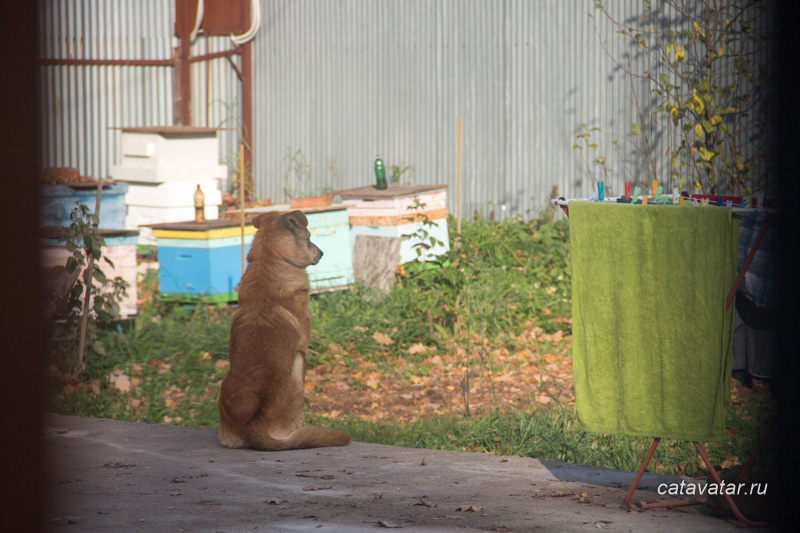 Yesterday I heard him barking for the first time.

From the street I saw in our window how the light came on and Lena passed.

And she smiles all the time ))

A very positive dog, although anonymous so far ) 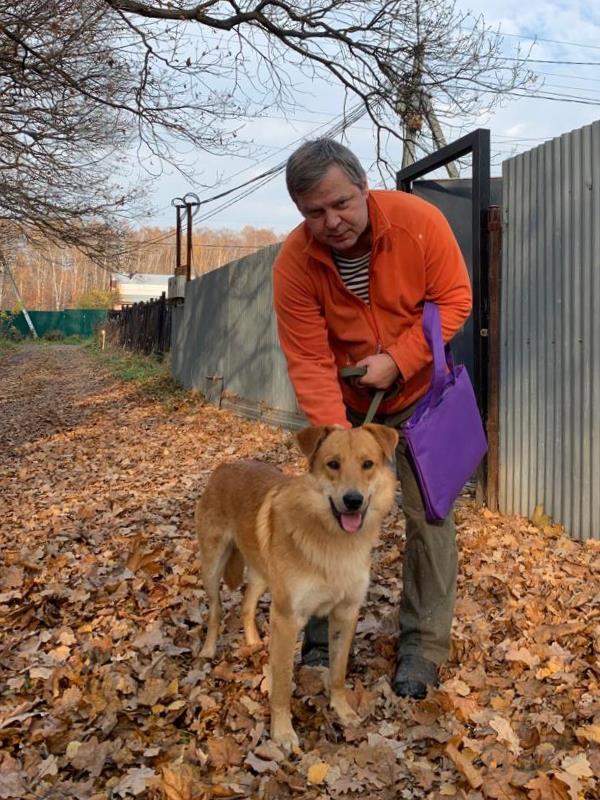 The last Friday of October has come, and congratulations to you! :)

Just 9 Fridays and the New Year will come!

Well, in the new year, everything will definitely be much better! :)

Treat your pet with a complex for cats, we will try to help :)

Immaculate Conception ...
You want, but at least one of the wonders of the New Testament is now forced to believe, without options. Now I’ll tell you the layouts and you will see for yourself!
Immaculate Conception ...
comments powered by HyperComments
You are reporting a typo in the following text: Simply click the "Send typo report" button to complete the report. You can also include a comment.